The Flying Fortress at Sprang-Capelle
On October 16, 1944 is taking the U.S. 8th Air Force 481 aircraft with an attack on various targets in Germany. The 96th Bomb Group (3rd Bomb Division), the Henschel factory in Kassel goal. One of the squadrons, 337, has taken off from Snetterton Heath, some thirty kilometers southwest of Norwich. Among the bras is "Chute The Works', a brand new Flying Fortress (serial number 43-37608) that today will receive the baptism of fire. For the crew is already the sixth mission. 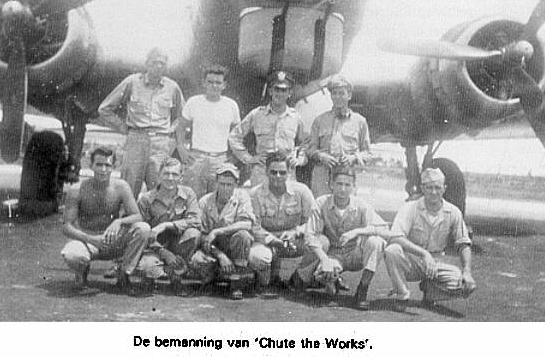 The flight is not without problems. The weather over England's poor form and it takes a long time, so many wasted precious fuel. Kassel until the flight goes without problems. After bombing the target the pilot of "Chute the Works ^, Lieutenant Ed Rubadue that one of the engines has failed and that the left wing fuel leaks. The flight engineer, a technical sergeant Clarence Brower, awarded contract to pump the fuel, but Frank Mistichelli gunner observes that the right wing shot leaks. To make matters worse there is a strong headwind and the formation leader gives Rubadue and eight other devices, which also have problems, command to move to Brussels.The devices bags a few thousand feet to avoid the storm and turn to Brussels. Rubadue lose the other B-17's soon out of sight. The navigator, Lt. Elliot Schriner sets a new course and the B-17G toils on, low over enemy territory. Suddenly, fired from the ground and the Flying Fortress gets a hit in the left wing. Rubadue do nothing but make an emergency landing. The unit falls down, make a turn above the South Holland dike and turn back north, probably because of the direction of Kaatsheuvel fired at. The height loss 'Chute the Works' a row of trees not avoid. The unit lost one of the engines and part of the landing gear. The right wingtip hit the ground and the device makes a bend of 180 degrees. It moves a few hundred meters and is roughly opposite Zuydewijn house to a standstill. The crew survived the crash. Coincidentally Germans quartered run straight from the home of Mrs. van den Heuvel and taking the crew captive. Ms. Verhagen, who render first aid, is sent away. The crew that night locked in a shed at the farm of the High J.van Bruchum Vaart. The next morning ten Americans to Culemborg and come through Amersfoort in Oberursel charged. There, in the interrogation center, the crew separated from each other. All survived the war and keep turning back home. 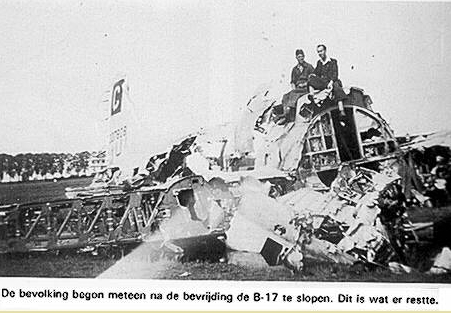 From his own diary.
We are in the High Bridge Geske Vaart and that's where the bomber layer and we see that an engine stopped. It is clear that he wants to make an emergency landing, he makes a right turn and disappears towards Dron, which is flak. A few minutes later he comes back and now has two silent engines. He is now much lower and shave brushes against the houses and it is certain that he comes down. Over the Loon Dike he makes a turn to the north. We sprint to the Hoge Vaart, chasing the plane. The height loss 'Chute the Works' a row of trees not avoid. The unit lost one of the engines and part of the landing gear.The right wingtip hit the ground and the device makes a bend of 180 degrees. It moves a few hundred meters and is roughly opposite Castle Zuydewijn halt. Behind the farmhouse is the end of v. Pelt. We are one of the first in and see some of the crew sitting dazed on the left, while there is still some crawling out. Both pilots are trapped and need to be helped out of their plight. The crew survived the crash and it's a wonder they alive. The bottom of the plane was completely out. Of escape came to nothing. We were soon at, but behind us was like a German car drove up the country. Ms. Verhagen, who render first aid, is sent away. The officer who had his business with us, was soon hit and took the lead gesticulating. The crew was along the railway and the Old Road to Spratt charged. There was a crew member who was supported by his comrades. They were put in prison in the upstairs room of the house opposite the Zwietering Cafe and bakery next cleaned up. The wounded are first linked in the hospital in Waalwijk. The next morning ten Americans to Culemborg and come through Amersfoort in Oberursel charged. There, in the interrogation center, the crew separated from each other. All survived the war after the surrender and return back home keep.